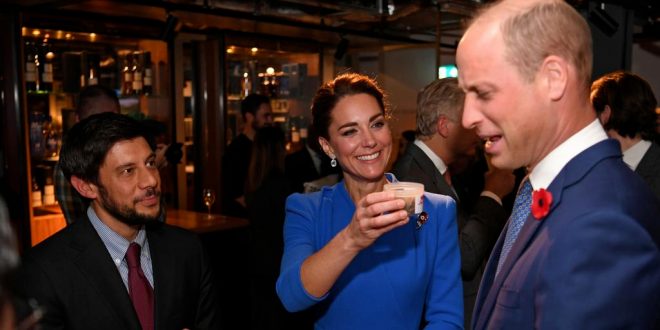 Kate Middleton stepped out alongside Prince William tonight in a long sapphire dress to complement his navy suit for a reception during the COP26 climate summit in Glasgow. The couple is hosting the event ‘for the key members of the Sustainable Markets Initiative and the Winners and Finalists of the first Earthshot Prize Awards,’ per Getty.

This is Kate and William’s second event today and their most formal one so far.

READ MORE: Duke And Duchess of Cambridge Glam Up For Earthshot Reception In Glasgow

Kate and William shared a lighter moment inside, with Kate jokingly offering William a tub of dead larvae, per Getty. William’s candid reaction is a sight to behold:

The two’s evening appearance comes after the Duke and Duchess of Cambridge had a more casual engagement with the U.K. Scouts during the day. They wrote of the outing on their Instagram:

The Scouts are helping to equip young people with skills to tackle climate change. Millions of Scouts across the globe are contributing to the#PromiseToThePlanet campaign, raising awareness of the consequences of climate change and encouraging individual as well as collective action to address it. #COP26

It also comes after Kate and William were seen at Heathrow airport en route to take a vacation with their children at the end of October.

Per The Mirror, Kate, William, Prince George, Princess Charlotte, and Prince Louis were ‘spotted unloading luggage from their car outside Heathrow’s opulent Windsor Suite with the kids carrying their own backpacks.’ Their vacation destination wasn’t specified as it was a private trip. But The Mirror noted that George and Charlotte are due back in school on Nov. 1, so unsurprisingly, the family is home now and back at work.

Share
Previous William And Kate Met With Scouts In Glasgow To Celebrate #PromiseToThePlanet Campaign.
Next The Queen May Have Stopped Prince William From Dumping Kate Back In The Day