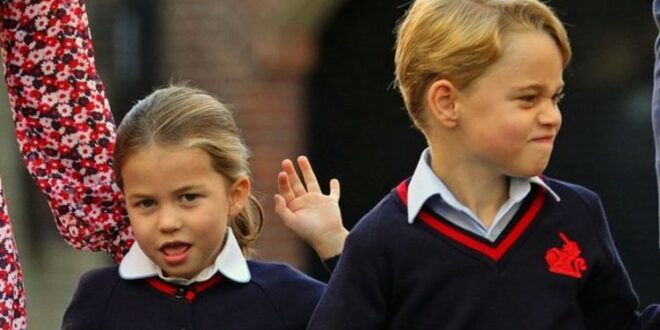 George And Charlotte Return To School After Family Staycation

he Duke and Duchess of Cambridge’s eldest children, Prince George and Princess Charlotte, returned to school this week after a fun-filled half-term break with their parents and younger brother Prince Louis.

Prince George, seven, and Princess Charlotte, five, are in Year 3 and Year 1 respectively, at Thomas’s Battersea school in south-west London.

The Cambridges were thought to be spending the October half-term at their country home Anmer Hall in Norfolk but Prince William and Kate reportedly enjoyed a staycation on the Isles of Scilly with their children instead.

William and Kate are said to have rented a modest four-bedroom stone cottage on the islands 25 miles off Cornwall, according to The Sun.

It comes after the family-of-five also spent a week on the island of Tresco during the school summer holidays in July.

At the start of the half-term, William and Kate baked cupcakes with George, Charlotte and Louis, which were delivered to a Royal British Legion care home in Norfolk to support the Poppy Appeal.

On Sunday night, reports emerged that the Duke of Cambridge had tested positive for COVID-19 in April and spent two weeks self-isolating at Anmer Hall, where he was treated by palace doctors.

He is said to have kept his diagnosis private because he didn’t want to alarm the nation.

READ MORE: Prince Charles Reveals Sadness Over Not Being Able To See Archie For A Year

William and Kate carried out their duties remotely during lockdown, with the Duke holding telephone and video meetings during his period of isolation.

The Duke’s father, the Prince of Wales, also contracted COVID-19 in March and suffered from mild symptoms. Prince Charles isolated for seven days while wife Camilla, who did not test positive for the virus, quarantined herself for 14 days in line with medical advice.