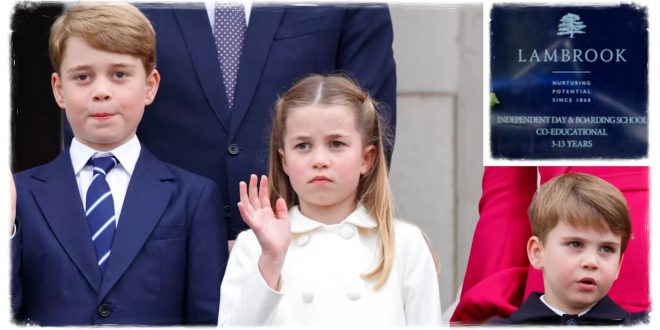 Kate, Duchess of Cambridge and Prince William’s three children will be starting at a new school in September. Prince George, Princess Charlotte and Prince Louis, will all enrol at Lambrook School, a prep school set in 52 acres of Berkshire countryside. It will come after the Duke and Duchess of Cambridge’s move to Windsor; the couple will soon leave Kensington Palace, their home in London, and relocate to Adelaide Cottage, a smaller property on the Windsor Great Park estate.

Their move not only positions the Cambridges closer to Queen Elizabeth II, who resides at Windsor Castle but also gives the three young royals more freeedom.

Their lifestyle at Kensington Palace has been described as “imprisoned” by royal expert Ingrid Seward, who appeared on the True Royalty TV’s Royal Beat earlier this month.

And their move to Adelaide Cottage may contribute to Kate and William’s desire for their children to have as normal an upbringing as possible.

Lambrook School is less than a 15-minute drive away from the Cambridges’ new home.

READ MORE: Prince William Is Refusing To Repeat The Sins Of Prince Charles

Established in 1860, the private preparatory school has been teaching pupils for over 160 years.

When he acquired Lambrook House, Robert Burnside had his eye on tutoring the sons of courtiers of Windsor Castle.

And 143 years ago, Lambrook’s royal connection went even further when two of Queen Victoria’s grandsons enrolled as pupils.

According to Lambrook’s website, Victoria used to travel from her home in Windsor Castle to the school to wetch her grandsons in theatre productions and cricket matches.

She is said to have parked her carriage on the school grounds and watched Christian and Albert from there.

Christian, or ‘Christie’ as he was affectionately named, was the first member of the Royal Family to attend school rather than be educated at home.

At that time, there were only 21 pupils at the school, all boys, as Lambrook accepted only male students between the ages of seven and 13 until 1993.

READ MORE: William And Kate’s Weekends Will Change When Their Children Start Lambrook

Victoria’s grandsons were the last members of the Royal Family to attend Lambrook, arguably making the Berkshire school a surprising choice for the Cambridges.

From the age of eight, both William and his younger brother Prince Harry attended Ludgrove School, a top-rated boys’ school also set in acres of Berkshire countryside.

All pupils at Ludgrove board fortnightly, with the school believing pupils benefit from all “being in the same boat”.

It is understood Kate and William are open to sending their children to boarding school in the future but believe they are too young at this time.

Both the Duke and Duchess attended boarding school during their education, but while William headed off at the age of eight, Kate did not go until she was 14.

Last year, a royal source told Us Weekly: “Kate and William are open to sending George to boarding school in the future and have already checked out a few, but they feel eight is a little young and want to wait until he’s slightly older.

“George going to school is a decision the Cambridges will make as a family.

“They’d never force George to go unless he wants to and they feel it’s right.”

The youngster is open to the idea though, having heard his parents’ stories about their experiences at boarding school, which he thinks sounds “super fun”.

Princess Eugenie is another royal alumnus of the prestigious boarding school.

According to its latest inspection report, the prep school educates children mostly from families with “professional and business backgrounds” who live within 15 minutes of the site.

Adelaide Cottage and Windsor Castle’s proximity to the school is likely a major draw for the Duke and Duchess of Cambridge, who are known to take a hands-on approach to parenting.

The royal couple is understood to want their children to have more freedom, away from the confinements of life in London.

Lambrook will offer George, Charlotte and Louis a more rural lifestyle, with the school self-described as “outdoorsy” and a place which gives its pupils “feathers to fly”.

As well as academic studies, Lambrook offers pupils the opportunity to try a range of extra-curricular activities, including everything from mountain biking to beekeeping, farming to fencing, polo to podcast making.

The school describes these as “enrichment activities” and likely appealed to Kate — an enthusiastic advocate for the importance of nature and outdoor play in early years education.

No doubt the Duke and Duchess are eager to secure the best possible education for their children and the school’s record of academic excellence was presumably another crucial attraction.

The Cambridges are currently in Balmoral for their annual Scottish summer break with the Queen.

It is understood the family of five will be moving into their new home in the coming weeks, with the three children starting at their new school soon after.