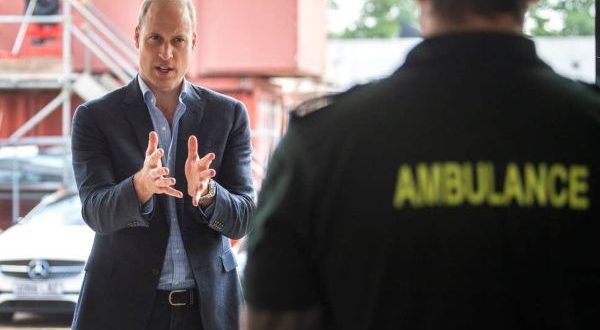 On Tuesday, Prince William began his transition back to in-person royal engagements after spending three months indoors. He visited the King’s Lynn Ambulance Station at the Queen Elizabeth Hospital, to thank staff for their work during the COVID-19 pandemic.

Prince William had a socially distanced meeting with the ambulance crew. First, he had his temperature taken  and washed his hands before stopping himself from shaking hands with hard-working staff from the East of England Ambulance Service Trust (EEAST).

William said: “I’m still fighting the urge to shake hands. I’m keeping my hands by my side.”

During the visit, William talked with emergency personnel about the work that’s been carried out over the last few weeks. The staff also shared with him they’ve received a big support from members of the public, local businesses and volunteering networks during the crisis.

William praised the staff: “How was it for dealing with the unknown. Most jobs you have experienced and done for a long time but this was completely new for the NHS.”

Prince William also revealed that he enjoyed the weekly Clap For Carers initiative during the crisis. He said: “It was powerful wasn’t it.”

“Everyone appreciates the NHS. Countries around the world envy what we have,” he added.

But joked: “I look forward to messages when we can drink more and go out to the local pub and have a pint.”

Before leaving the station, the royal thanked paramedics working from their families for their “sacrifices” and for all their hard work.

Share
Previous Pandemic parenting: the golden rules William and Kate swear by in lockdown
Next Duchess of Cambridge surprises children during school assembly