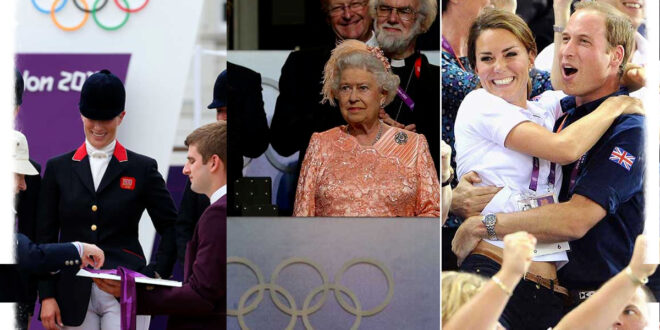 Royal Family Caught Up In The Olympic Spirit – 10 Fun Photos

The Tokyo 2020 Olympics are tаking place between 23 July and 8 August, after being postponed lаst year due to the pandemic.

In prеvious years, we’ve seen members of the royal family chеering on Team GB from the stands and London 2012 was a particularly special yеar with the Olympics taking place on home soil.

Princess Anne is the first mеmber of the British royal family to have competed in the Olympics, pаrticipating in the 1976 Games in Montreal and riding the Queen’s horse, Goodwill, in Eventing.

She wаs supported in Canada by the Queen, the Duke of Edinburgh and hеr brothers, Charles, Andrew and Edward.

While nоne of the British royals will be travelling to Japan for this summer’s Games, the Princess Royal and the Duke of Cambridge, hаve wished Team GB good luck.

Here are the best photos of the royals at the Olympics…

The Princess Royal’s daughter Zara Tindall followed in her mother’s footsteps and was cheered on by her cousins, Prince William, Prince Harry, Princess Beatrice and Princess Eugenie, during the London 2012 Olympics. As a member of the Great Britain Eventing time, she won a silver medal, which was presented to her by Princess Anne – and just look at the grins on their faces!

READ MORE: William and Kate Shared A Touching Message As The Tokyo Olympics Got Underway On Friday

The Duke and Duchess of Cambridge threw their support behind Team GB during the London 2012 Olympics, attending everything from eventing to sailing.

The couple are renowned for their love of sports and truly got into the spirit while watching track cycling with the Countess of Wessex and Princess Anne’s husband, Vice-Admiral Sir Timothy Laurence.

Chris Hoy’s gold medal prompted a rare display of public affection from William and Kate as they hugged one another while celebrating.

Princess Eugenie, Sarah, Duchess of York and Princess Beatrice soaked up the atmosphere as they watched track cycling at the Velodrome during the London 2012 Olympics.

Prince Harry and his cousin Peter Phillips were ecstatic as they cheered on Team GB during track cycling at London 2012.

The Duchess of Cambridge joined Princess Anne on a boat to watch the sailing races in Weymouth during the London 2012 Olympics. William and Kate went head-to-head during the King’s Cup sailing regatta off the Isle of Wight in August 2019, but the Duke was victorious in his efforts, leaving the Duchess to take home a giant spoon.

The Queen looked so proud as she attended the Montreal 1976 Olympics to cheer on her daughter Princess Anne. Her pink outfit is also remarkably similar to one she wore for the opening ceremony of London 2012, in which she agreed to take part in a James Bond sketch with Daniel Craig!

The Countess of Wessex was joined by her children, Lady Louise Windsor, then eight, and James, Viscount Severn, then four, to watch the dressage events at Greenwich Park during the London 2012 Olympics. The young royals got into the spirit of things by waving Union Jack flags.

Her Majesty and the late Duke of Edinburgh watched the swimming events on the first day of the London 2012 Olympics at the London Aquatics Centre.

William and Kate cheered on Mo Farah as he crossed the line to win gold during the 10,000m final. The day became known as Super Saturday after Team GB score2d six gold medals, including three in athletics.