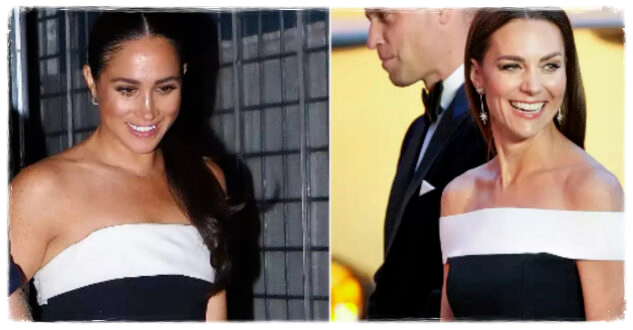 It was inevitable. From the moment Meghan Markle officially announced her engagement to Prince Harry, comparisons were drawn between her style, and that of her soon-to-be sister-in-law, Kate.

While you’ll never see the Duchess of Cambridge wearing distressed jeans, she and Markle actually have more in common fashion-wise than we originally thought. Read on for all the times they dressed exactly alike.

The black and white look

Both Meghan and Kate stunned in black and white looks in 2022, with Kate wearing a graphic gown to the premiere of Top Gun Maverick and Meghan opting for a similar look but as a jumpsuit during her July visit to NYC.

The royal family loves a tartan. On the left is Meghan Markle during her first official visit to Scotland wearing the Black Watch pattern, and on the right is Kate at St. Andrew’s School in 2012.

Meghan channeled the royal family’s love of plaid during a visit to Wales. Meghan wore a plaid off-the-shoulder jacket by Theory, while back in December 2017, Kate wore this plaid look in Manchester. Meghan’s plaid pattern is called the Prince of Wales Check.

In 2016, both women were feeling red. Kate paid tribute to the color of Canada in an asymmetrical gown during a royal visit to Victoria, while just a few months prior, Meghan stunned on the Today show wearing a scarlet knee-length look.

It’s not all ball gowns and tiaras for these women. Here they are each showing off their sporty style.

For the 600th Anniversary Gala Benefit for St. Andrews in New York in 2014, Kate wore a teal Jenny Packham gown which she paired with an up-do and statement earrings. Her outfit was not dissimilar to Meghan’s look on the red carpet at Elton John AIDS Foundation’s benefit in October of 2014.

Both Meghan and Kate prove you can never go wrong with a little black dress. Kate is pictured here in November 2016 wearing a Preen ensemble, while Meghan is seen at the 2015 Step It Up For Gender Equality Celebration in an off-the-shoulder look.

While Kate chose a soft shimmer to mark the launch of the UK-India Year of Culture, Meghan opted for a bold metallic silver minidress at look at the CFDA/Vogue Fashion Fund Awards in 2015.

This is how you show a little skin, without raising too many eyebrows. On the left is Kate in a semi-sheer dress by Saloni, and on the right is Meghan wearing a burgundy down.

In 2010, Kate set trends when she wore a royal blue wrap dress to announce her engagement to Prince William. Meghan was spotted wearing a similar style in 2016 at an Instagram dinner in Toronto.

While all the looks on this list are notable, there has only been one instance of Kate and Meghan wearing the exact same dress. The Duchess has worn Diane von Furstenberg’s Zarita dress (pictured here) multiple times, most recently in November of 2017. Back in 2012, Markle wore a shorter, navy blue version of the Zarita to an event for USA Network in 2012, two years before Kate first stepped out in the style.

Okay, this one isn’t an exact match, but clearly both Meghan and Kate are fans of the color-block trend. Kate was spotted wearing the look at a luncheon for the Queen’s 90th birthday in 2016, while Meghan tried it out on the red carper in 2012.

While Kate likely won’t be wearing ripped jeans anytime soon, she does step out in denim every so often. Here she is in Calgary on the royal tour of Canada in 2016. While we haven’t found a proof Meghan’s ever worn a cowboy hat just yet, we did find this photo of her wearing jeans and a button down at an event for Dove in 2015.

Kate stepped a bit outside her fashion comfort zone in this classic sheath dress by Erdem in a vibrant floral pattern, which she wore to a Heads Together Event in early 2017. Meghan, on the other hand, was spotted wearing a similar design at fashion week in 2013.

An all-white look makes for a nice photo moment. Here is Kate with Princess Charlotte upon arrival in Poland during the royal tour in 2017. On the left, of course, is Meghan in a white wrap coat by Canadian brand Line The Label, which she wore shortly after she announced her engagement to Prince Harry.

Sometimes you just want to keep things comfortable and casual. Enter: the shirtdress. Kate wore a polka-dot style by Kate Spade to an engagement in late 2017, while Meghan tried out the silhouette on a trip to New York in 2016.