Breaking News
Home / Other / Royal Superdads: How These Fathers Changed Protocol To Be Hands-on Modern Parents 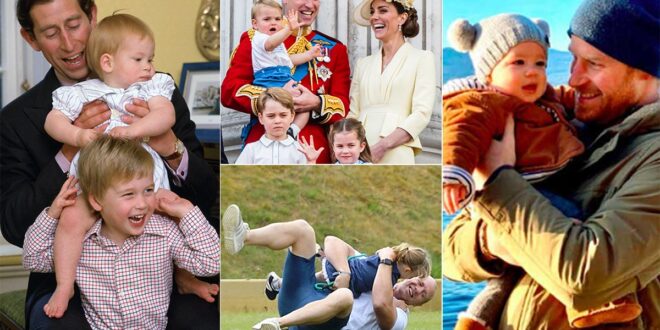 Royal Superdads: How These Fathers Changed Protocol To Be Hands-on Modern Parents

Nappy changes, the school run, TikTok and social media – 21st century dads have so much to get to grips with. Combining all that with royal duties can be a tough balancing act. Times have changed since the Queen’s grandfather George V ruled his children with a rod of iron in a regime based on instilling respect, deference and duty.

Instead Prince William and peers like his brother Harry, Mike Tindall, King Felipe of Spain and Sweden’s Prince Daniel dole out hugs, reassurance and light touch discipline. During the pandemic, they’ve been leading by example. Here are some of the most inspirational royal superdads…

When Prince George was born in 2013, with millions watching around the world the Duke of Cambridge lovingly escorted Kate and their son out of hospital before buckling the newborn into their Range Rover and taking the wheel. As he did so, William let out a ‘phew’ of relief and pretended to wipe sweat from his brow. Humour aside the message was clear: when it came to looking after his loved ones the family man planned to be firmly in the driving seat.

Ever since then, whether he’s pushing Louis on a swing, calming Charlotte’s nerves on the first day of school or “struggling through Year 2 maths” with George, William has proved himself a devoted, fiercely protective father. Even on official occasions, on the palace balcony or on tour, he instinctively knows when a kind word or a smile is needed.

Asked in 2016 whether George had realised that he’s not from a ‘normal family’, the future King replied: “As far as we’re concerned, we are a normal family. I love my children the same way any father does and I hope George loves me the same way any son does his father, so we’re very normal in that sense.”

“It’s a case of keeping a secure, stable environment around him and showing him as much love as I can as a father.” William also made it clear that fulfilling his duties as a Prince would never be at the expense of his role as a father, saying: “If I can’t give my time to my children, I worry about their future.”

One of the unexpected side effects of quarantine, says Harry, is “so much family time that you almost think, ‘Do I feel guilty for having so much family time?'” Giving an insight into his new life in California, the Prince said that he’d often “been on the floor rolling about in hysterics” with Meghan and their son Archie. The result is one very smiley, cuddlesome baby, seen in the video released by his proud Mum and Dad for his first birthday. Family friend David Beckham praised Harry as “loving” and the person that “every father wants to be. He’s enjoying being a young father for the first time”.

That was clear from the moment the Duke of Sussex announced Archie’s arrival on 6 May 2019, describing him as “to die for”. In response William laughingly welcomed his brother to the “sleep deprivation society that is parenting”. To show that he’d been shouldering his fair share of night duty and nappies, a few days later Harry arrived at an Invictus Games event for wounded military personnel pretending to prop open his eyes with matchsticks.

One friend, Invictus star JJ Chalmers, said he “had a buzzing smile on his face. Like any father, he lights up even more when he speaks about his son and how proud he is of his wife”. Meanwhile, Invictus cyclist Dennis van der Stroom said that Harry had told him that “having a small child was his new focus and new goal”.

Harry and William’s most cherished memories of their Pa, as they call him, are times spent at Highgrove and Balmoral pottering about in the great outdoors. Later they would also praise Charles for stepping up during their teens when their mother Diana died. “He was there for us,” explained Harry, recalling his father’s support during those desperately sad times.

When his “darling boys” were home from boarding school, the heir to the throne would clear his diary to take them on private trips, memorably once to Botswana, a journey which sparked their enduring love for Africa. To this day they chuckle about how Pa would embarrass them by laughing at the wrong moment during their school productions.

William says it’s a family trait to find it amusing “when things go wrong”. The Princes told interviewers Ant and Dec that Charles would send them letters in his spidery handwriting that they found impossible to decipher. “We really got a sense of how genuinely close they are,” said Dec. “William and Harry are so very proud of their dad. They loved telling the sort of funny stories everyone has about their dad. There’s obviously a lot of love there.”

In the younger generation, Princess Anne’s son-in-law Mike is another example of a dad who “enjoys every minute” of having a family. He describes six-year-old Mia, who famously grabbed the Queen’s handbag in an official portrait, as “a fantastic bundle of energy”, and says her sister Lena, who turned two on 18 June, is “just starting to find her feet”.

Together with his Olympic equestrian wife Zara, Mike has been home schooling, concentrating on core subjects in the morning and “playtime, sports and being outside in the afternoon”. He’s giving his girls an exhilaratingly active childhood on a farm. “There are lots of animals, including horses and dogs, that we look after,” says the former rugby star. “Mia’s been riding since she was little and also likes riding her bike and playing ball.”

For years we used to see the daughters of the Spanish King being hoisted up on their 6ft 6in papa’s shoulders. As teenagers Leonor, 14, and Sofia, 13, are a little too big for that now, but they’re still very much Daddy’s girls. When their mother Letizia gave birth to Leonor by caesarean section in 2005 Felipe told journalists there is “nothing more moving than seeing your daughter’s face for the first time and seeing your wife become a mother”. “It’s obviously the happiest day of my life,” he added in comments that were far more effusive than the understated ‘mother and daughter are well’ statements typical of previous royal generations.

When cameras trailed the family for a documentary two years ago, the King was seen chatting to the girls over lunch on Saturday and driving them to school, the image of the multi-tasking dad as he quizzed his eldest on her periodic table ahead of an exam. While his daughters are given equal love and attention at home, on the public stage Felipe has begun Leonor’s apprenticeship to succeed him on the throne. On his 50th birthday, he told her in a speech: “You have my complete trust and I feel so immensely proud of you.”

Like Felipe, Denmark’s Crown Prince was brought up in an era when royal parents, even ones as loving as Queen Margrethe and Prince Henrik, left the day-to-day care of their children to nannies. “When I was small, I was presented to them, washed and brushed, before I was put to bed,” Frederik once told an interviewer, vowing that he’d be a hands-on dad.

It’s not uncommon to see him cycling through the streets of Copenhagen to school with the four children he has with Princess Mary – Christian, 14, Isabella, 13, and Vincent and Josephine, nine. Their home in Amalienborg Castle, although grand, is a wonderful mix of noisy children, dogs, laughter and fun. On Frederik’s 50th his wife paid tribute to him as a father, saying that to their sons and daughters, he is a hero, “who allows himself to be carried away by imagination, play and games”.

“They describe you as sweet, fun, wonderful, wise, brave, helpful, cool and handsome,” she went on during a speech for his birthday gala. “You encourage them to believe in themselves. And when on the rare occasion you get cross, you quickly put it behind you…. For me, when we are together as a family is when I feel most grateful, most united, most in love.”

Europe’s model royal fathers are an inspiration across the world. During a visit to South Korea in 2015, Prince Daniel and his wife, Sweden’s future Queen, Princess Victoria, were praised for sharing parenting duties. “I hear you both spend time at home with little Princess Estelle and that sets an example,” the South Korean President told them. Now eight-year-old Estelle also has a brother, Prince Oscar, four.

Daniel loves the little moments of family life – like the sleeping beauty moment in 2016 when he was pictured smiling tenderly at his daughter as she dozed off during a sports tournament; learning the latest dance crazes from his children or reading them a bedtime story.

“Reading books to your children is precious,” he continues. “Personally, I attach a lot of importance to it, it’s a moment of sharing where we can talk about everything. Spending time with your children is the most important thing.” Heart-warming sentiments like these put the sacrifices of fatherhood in the shade, and are shared by all the great dads in our lives.